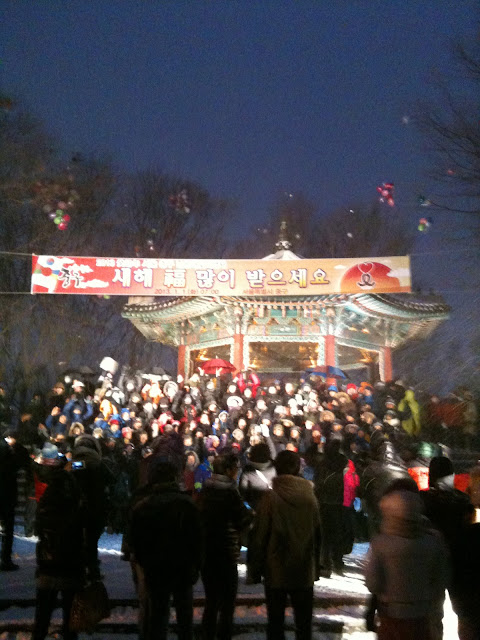 If you are thinking that the photo above was taken shortly before midnight on December 31st, 2012, as jubilant throngs gathered to celebrate the New Year, you are wrong.

Oh, the throngs were celebrating the New Year - you got that part right.

On top of a mountain.

What we were doing was participating in a 'Sunrise Festival,' a tradition in Korea in which people gather early on New Year's morning to view the first sunrise of the New Year.  This practice is supposed to bring good luck in the year to come and may or may not also grant a wish to the onlooker.  'Sunrise Festivals' are held all over Korea - particularly on the East Coast - for just that purpose, with thousands of people traveling to the easternmost spot they can reach on the peninsula to be able to greet the sunrise on New Year's Day.

Sunrise-greeters who aren't keen on traveling to the East coast are not completely out of luck, though:  most large cities host their own sunrise festivals, usually on mountains or hills.  There are several of these events in Seoul, but the closest was being held on top of Namsan (South Mountain), home of the N Seoul Tower, and a short subway ride away from our home.

We had debated half-heartedly about going downtown on New Year's Eve to Bosingak to hear the bell rung the traditional 33 times in its pavilion and see the release of hundreds of Roman Candles - but the idea of jostling with thousands of drunk-ish people in the bitter (-18C) cold, not being able to see what was going on, and then competing with those selfsame people in the crush for public transportation afterwards didn't appeal to us.  (There was a certain irony in the fact that really, all we ended up doing was jostling with many of those very same drunk-ish people in the bitter cold at 6am instead of midnight, but we tried not to think about that.)

While surfing around the internet looking through the various New Year's offerings, I ran across several mentions of these festivals, and decided that this would be it.  This would be the way we would start off 2013! (It goes without saying that Sons#1 and #2, who are normal, healthy teenagers, would have nothing to do with this scheme. It should also probably be pointed out that this was another one of my 'Wouldn't it be fun to...' ideas which MrL went along with without ever once questioning my decision-making matrix or my sanity.  Not in the blinding snow, the freezing cold, or our later treacherous descent off the mountain. The man is a saint.)

This is how it came to pass that, at 5:45am on New Year's Day, MrL and I were emerging from our apartment building into a driving snowstorm. (Note:  it had not occurred to either of us to check the weather forecast or do more than glance out the windows at the darkened city.  Had we done so, we might have abandoned the entire undertaking and returned to bed.)

Since we were already up, dressed for the weather (it's all about layers, darlings) and outside, we decided to go ahead with our plan, taking the subway a few stops and catching a bus that would take us most of the way up the mountain.  The bus had a standing-room-only crowd, and the driver cheerily yelled comments over his shoulder to us (no idea what he was saying:  he seemed pleasant) as he navigated slowly and carefully up the slick mountain road in the blinding snow, occasionally pulling off his stocking cap to wipe the condensation off the interior of his windshield in the humid bus - apparently as a sort of a boost to his defroster.

We emerged about 500 meters away from the tower plaza, and began toiling up the slick hill in the dark toward the glowing tower.


In the outdoor plaza, a number of tents were erected where sunrise-seekers were greeted with a free cup of hot coffee or tea.

The plaza was slowly filling up with people, with the focal point being the pagoda, where the Master of Ceremonies (as far as we could tell:  he had the microphone, and all the lights and cameras seemed to be pointing at him) was chatting up the crowd.  People were milling around the plaza in the falling snow  - some dressed for a night out on the town, some carrying umbrellas, some of them sporting a full complement of technical outerwear, including crampons and hiking poles.  We smelled rubbed elbows with more than a few people who were obviously finishing up a long night of celebrating.


MrL and I - realizing that we had a good 45 minutes to freeze wait before the sun rose- decided to go into the indoor pavilion built at the bottom of the tower, which was open, heated, and full of a number of other shivering sunrise-greeters who had also gotten there a little too early.  The coffeeshop on the ground level was open and doing a brisk business, and many people were gathered around a wall-mounted TV, which was alternating between coverage of various sunrise festivals and the miserable weather - both of which interested most of us, for obvious reasons.

After we'd used the facilities (clean, large, and no lines, for those of you who might be interested in doing this in future,) we took a quick 'selfie' before heading back out into the wind and the snow to see what the sunrise situation looked like. 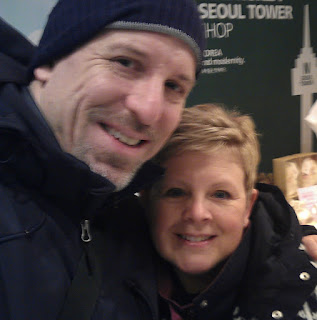 The plaza had filled up even more while we were inside, and the crowd was laughing and cheering.  We had read that sunrise was supposed to take place at 7:47 AM, but the sky was full of clouds, snow, and haze at that point, and we had no idea if there was some sort of a countdown to sunrise, or if people just generally acknowledged that the sun had, indeed, risen somewhere, and considered it a done deal.

At that point, we decided to climb up onto the observation deck, since that seemed like the best place to see a sunrise.  There was a small crowd up there, taking pictures of the area below us that would probably have contained a sunrise if we could have seen it.  Yes, the snow had obscured the sky so much that, had MrL(geek that he is) not had his trusty compass app on his phone, we wouldn't even have known in which direction to be looking for the sun.

After a certain amount of time spent in fruitless milling about with other confused people and recognizing that it was probable the sun had already risen, we decided to mark the occasion, such as it was, with another 'selfie' taken on the observation deck beneath the Tower:

We had kept one ear open for some sort of countdown or 'Sunrise Hurrah' or any other indicator letting us know that the sun had, in fact, conclusively risen, but things seemed to be 'business as usual' over in the pavilion, with groups continuing to get their pictures taken, the cheerful master of ceremonies maintaining a continuous patter, streams of people continuing to hike into the plaza, and an equal number of people leaving it.  At that point, it was clear, due to the watery light in the sky over the plaza and the released balloons (previously tied in the trees) that the sun had risen, so we decided to begin our hike down the mountain.  The 5 centimeters or so of snow that had fallen while we had been there, combined with a sheet of ice underneath it, turned our whole descent into what MrLogical refers to as a 'pay-attention' sort of activity.  It is probably worth noting that the trail we took down the mountain consisted of approximately 75% stairs, which were about as treacherous as you would imagine, and which required intense concentration, small, timid steps, and a sincere wish that we had worn crampons over our hiking boots.

By the time we got down to the bottom and back to civilization, we were cold, wet, tired, and badly in need of coffee. We had gotten up in the dark of a winter's morning, made our way through a snowstorm, nearly broken our necks more than once, and splashed through piles of grey slush  On top of that, we weren't sure exactly when the sun had risen, since we hadn't been able to see it.  On paper, it doesn't sound like much of a way to ring in a new year.

But would we do it again? Absolutely. 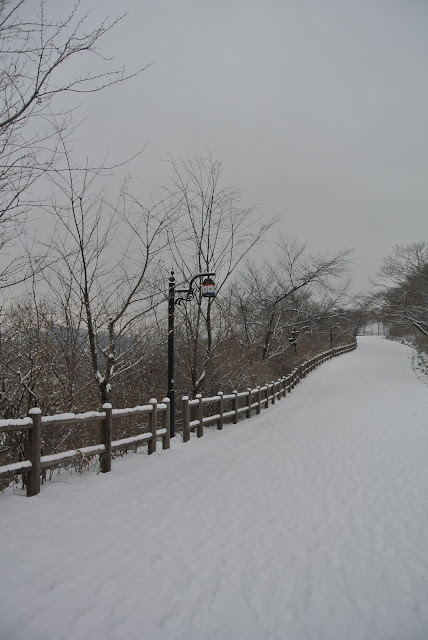 Xclusive Marquees said…
Happy new year MsCaroline, first time i celebrated new year with so much fun. Whole day was good specially at night i attend a party held in our town, It was held outdoor in open sided marquee and was fully decorated with lighting and also burnt firecracker, sparklers and fireworks. It was the best ending of 2012.
January 1, 2013 at 6:57 AM

Stacy said…
That's what I call getting in the spirit and taking advantage of cultural offerings where you live! Well done to you both!

Happy New Year and may this one be your best year yet!

MsCaroline said…
XM - thanks, and same to you! Glad you had such a nice New Year.

Stacy - Thanks! We vacillated quite a bit about going, but ultimately were *very* happy that we'd done it! Oh - and you should know that we made turkey gumbo the day after Christmas (Boxing Day) and I did *not* burn the roux! ; ) Happy New Year!
January 1, 2013 at 11:27 PM

MsCaroline said…
RM - Yes, it was definitely unforgettable, and - in retrospect - quite lovely. I've already come up with a number of strategies for keeping my toes and fingers warmer should I ever do it again, though.
January 1, 2013 at 11:43 PM

Barbara said…
How fun! Happy New Year! But really I have to say: Brrrr! I probably would have gotten up and dressed for the cold and forgotten to check the weather. But when I went outside so early to find a blizzard, I'm sure I would have gone out to breakfast instead and missed the experience on the mountain!
January 2, 2013 at 7:03 PM

MsCaroline said…
Barbara-Happy New Y ear to you, and I hope you're somewhere warmer than I am! I can assure you, when we walked out into all that whirling snow, it crossed both of our minds not to bother, but we had told a number of people we were planing to do it, so we sort of felt obligated to at least try. Besides- none of the breakfast places within walking distance were open yet!
January 3, 2013 at 1:09 AM

BavarianSojourn said…
Fantastic photos! What an experience, and something you will probably never forget! You would have to be sensible the night before though wouldn't you? Or perhaps not go to bed at all! :D Happy 2013, wishing you all a fantastic year! :) x
January 4, 2013 at 9:52 AM

Miss Footloose | Life in the Expat Lane said…
Some adventures are really worth dressing up (warm)for! I think it's a great tradition to see in the New Year by celebrating the first sunrise, whether it's cold or not. You took part and now you have a great story. Happy New Year!
January 14, 2013 at 10:51 PM

MsCaroline said…
Emma - We must be getting old, because we were extremely sensible! Of course, knowing we were getting up at 5am put a certain damper on everything. But it was worth it!
January 15, 2013 at 11:51 AM

MsCaroline said…
Miss Footloose - thanks so much for stopping by! Yes, it's definitely a memory we'll always cherish, although I think I might have enjoyed it a little more if we'd been spending New Year's Eve in Thailand like we did last year...ah, live and learn!
January 15, 2013 at 11:53 AM