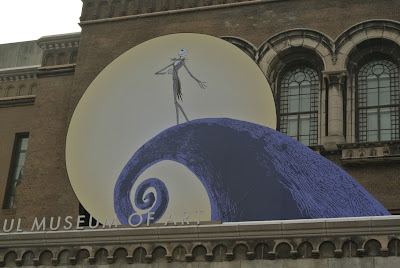 Note:  This is part III of a three-part weekend.  You can read Parts I and II  here and here.  Let me also add, if it seems to you like this weekend has gone on forever, try being the one blogging about it.  That is all.


Since MrLogical and I had spent our respective Saturdays out in the ice and snow, we had agreed ahead of time to spend Sunday doing something with Son#2 en famille instead of leaving him to his own devices two days in a row (guess which one he would have preferred? You're right.)  In this case, the decision was very easy, since all 3 of us had been looking forward to seeing the Tim Burton Exhibition at the Seoul Museum of Art ever since we'd found out it would be coming to Seoul.  While we aren't Tim Burton fanatics or anything, I would say we have seen just about every movie he's ever been involved with, and are huge fans of his work.  If this gives you any new insights into MsCaroline and her personality, so be it.

Accordingly, we all got up bright and early on Sunday morning and readied ourselves to be at the museum right when it opened at 10.  Actually, what really happened, is we all moved quite slowly, especially MrL, who had gone out  drinking makgeoli after his day hanging from the waterfall and found waking up to be a bit -shall we say -challenging.  However, having promised to go with us, he loaded up on ibuprofen and coffee and accompanied Son#2 and me out into the cold to the Museum.  (That, Dear Readers, is an example of True Love.)

The Museum had gone all out to make sure that you knew that the Tim Burton exhibit was there, because as you approached the pathway leading up to the museum, this is what you saw: 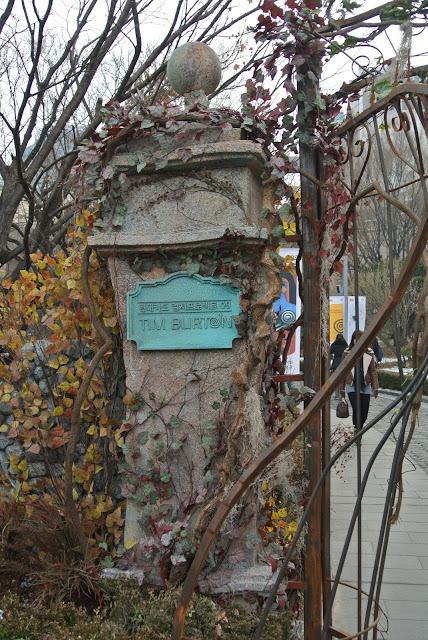 If you still had any doubts as to what was going on, once you arrived at the museum itself, they were put to rest: 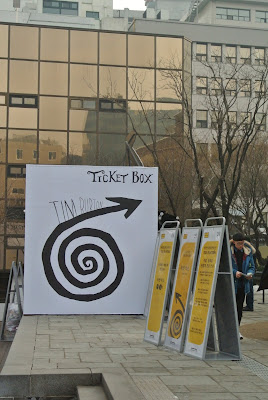 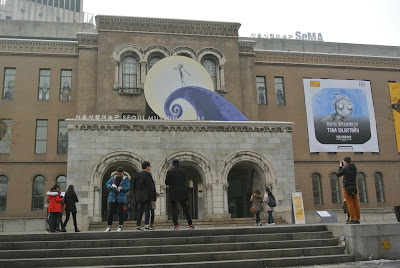 The best exterior decoration was probably the windows: 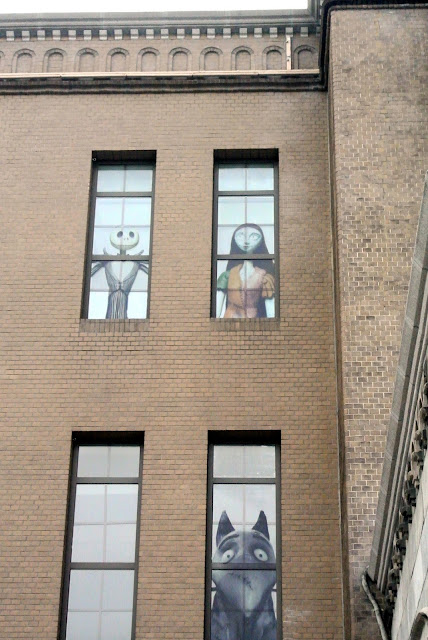 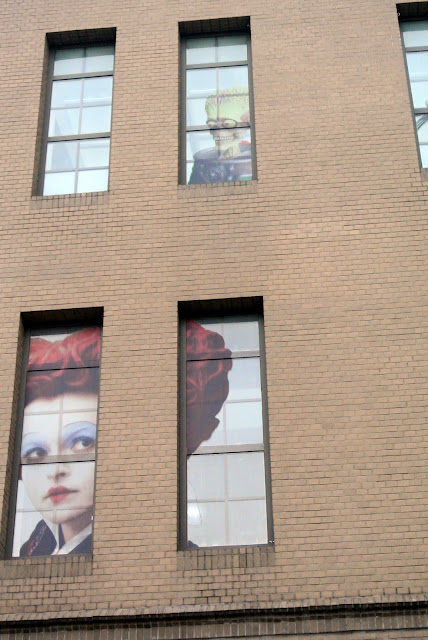 Once inside, the entrance to the exhibit was quite clearly marked, and much of the downstairs featured quite a bit of Burtonobilia - both background info and photo ops - I realized later it must have been there to keep people entertained while they waited for their turn to enter the exhibit, which supposedly had been known to have waiting times for up to an hour.  We must have gotten there just before that happened, which is good, because MrL probably wouldn't have lasted that long. 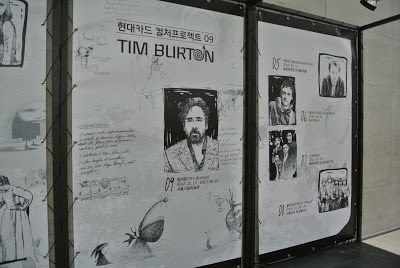 I kept wondering if Tim Burton had had anything to do with the decor.  If he didn't, my hat is off to the exhibit decorators or curators (or whatever they are called) because they captured Tim Burton's hilariously disturbing - yet genius - vibe quite perfectly: 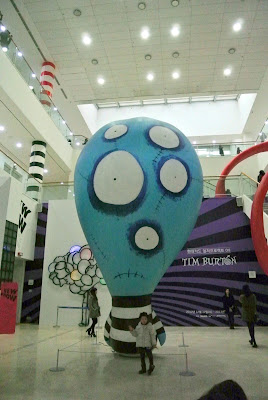 Once inside the exhibit, no photos were allowed (sigh.)  The exhibit was divided into three sections:  basically Burton's childhood and growing up years, his years at CalArts and early years working for Disney(really.  Disney - who knew?)  and his later/present work.

The early work was really pretty fascinating, since it included things like high school essays, photos, and even a couple of posters that he had drawn for contests (including a fire safety one that was pretty amusing.) Even in some of his early doodles, you can see hints of things to come (Jack Skellington and Frankenweenie come to mind here.)

The exhibit also includes sculptures of many of his animated characters, including pretty much the whole cast of "Nightmare Before Christmas." There were also many of the models used for stop-animation films, as well as dozens of concept sketches.  There was also plenty of film memorabilia, including the Catwoman suit that Michelle Pfeiffer wore in the 1992 Batman Returns, Johnny Depp's suit and razor glove from Edward Scissorhands(1990), the razors used in Sweeny Todd (2007), and the carousel that Michael Keaton wears on his head in Beetlejuice (1988,) not to mention dozens of mock ups, sketches, and even Burton's desk blotter (covered with doodles.)

The exhibit was well-organized and well-marked in English, and audio tour headsets were available for an extra fee at the desk outside the exhibit, although we chose not to use them this time around.  Our biggest gripe was with the crowds, which - as I experienced at the Tut Exhibition last year - were crushing, even though we arrived only 45 minutes after the museum opened. We did arrive early enough that we were able to buy tickets quickly and only had to wait for about 5 minutes to get into the exhibit, although once inside, the crowd was fairly heavy and moved fairly slowly, especially if you were behind someone listening to an audio tour. However, after living in Seoul for a year and a half, I shouldn't have been surprised to find that an extremely popular exhibit was crowded on a weekend morning.  As I've said before:  If there's something in Seoul worth seeing, you'll be seeing it with 2 million other people.

Location:   The Seoul Museum of Art (SeMA)
Dates:  December 12th-April 14th 2013
Cost:  KRW12,000 per adult
Hours:  Weekdays, 10am-8pm;  Weekends and National Holidays:  10am-6pm. Closed Mondays. Check here for more details about closings.
*note:  the earlier you arrive, the more time you'll have to look at the exhibit in relative peace and quiet.  Weekends are the most crowded.
How to Get There:  Take Subway line 1 or 2 to City Hall.  Go out Exit #2 (in Subway line 1,) walk straight ahead, and you'll see Deoksogung palace (on your right.)  Turn right  into the road (it looks more like an alley) just past the palace   Follow that road as it curves around and you'll see the Museum of Art on the left.

Trish said…
What a weekend you've had! And hats of to MrL for battling on under such conditions ;-). It's a wonder all those wacky exhibits with their bright colours didn't give him even more of a headache.
January 23, 2013 at 12:11 PM

BavarianSojourn said…
That looks like a fantastic exhibition! I love Tim Burton, he is one of my fantasy dinner party guests (along with Helena!)... (:
January 23, 2013 at 2:34 PM

Elizabeth Musgrave said…
Looks extraordinary! I can never decide if I like Tim Burton or not. One minute I am loving it and the next it has tipped me into a sensation which is a bit too uncomfortable. Would probably have gone to the exhibition though, just to muse a bit more about whether I like him or not!
January 23, 2013 at 4:01 PM

MsCaroline said…
Trish - yes, he deserves some sort of award! And, yes, he was more than ready to head home afterwards!

Emma- It was really good - and there were some interesting quotes by Helena about her husband - one about how he's happiest when he can sit in a hotel room at the Ritz and doodle - love those little insights!

Elizabeth - yes, he does walk a fine line between 'wonderfully creative' and 'disturbing' - doesn't he? This exhibition did a really good job of displaying a lot of his art though - even if you didn't care for the subject matter, you really had to admire his talent just as an artist - something I hadn't really thought so much before, since I'd always seen his work in films. We try to go to everything that comes along these days, fans or no - figure we may as well take advantage of living in such a big city while we can!