Winter Weekends in Seoul: Part I: Ice and Snow


(Note:  MrL and I had an extremely busy weekend at various sites in and around Seoul.  So much so that I can't fit it all into one blog post without boring all of us to death.  Here's Part I.)

So, we're just about halfway through January and the temperatures here in Korea are slightly more reasonable - a few degrees above freezing during the day - which means that you can go outside without your face freezing before you've taken more than a few steps. Not exactly a tropical heat wave, but after the last month or so, 'above freezing' seems quite pleasant to me.  And the improved temperatures mean that going out to do things doesn't sound quite so much like a punishment anymore.

This is a good thing, since MrLogical and I spent the first half of our weekend out in the elements.  MrL - who, as you all know, only enjoys sports that require him to buy lot of equipment - was  heading out to his first ice climb in 11 years. He was delighted to be able to once again dig out his ice-climbing equipment- which had not seen use since the Bush Administration- and which would undoubtedly be classified today as 'vintage.'  He and his friend had signed up for a climb with Sanirang Alpine Networks and were looking forward to it.  They spent the day with a group of others at (on?) a frozen waterfall about a 40 minute-drive south of Seoul, 'representing for the old dudes' - an accurate statement, considering that most of MrL's gear was older than some of his fellow climbers.  The point is, that MrL spent most of his day doing this: 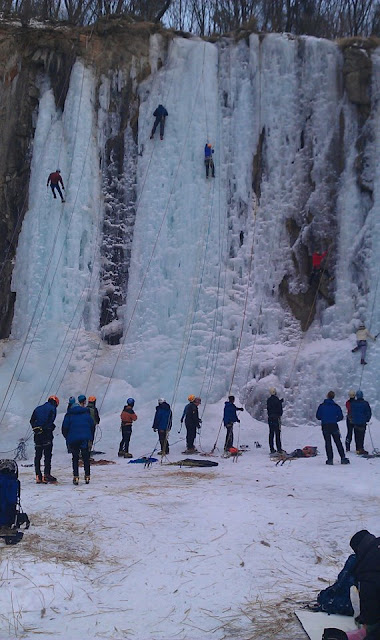 In my case, the outing was somewhat less extreme, but still included a significant amount of ice and snow.  The school where I teach has schoolwide 'Ski Days' coming up this week, and all staff and parents who would be traveling to the resort with the children were asked to come to the resort on Saturday to look around, familiarize themselves with the facilities, and (in some cases) remember how to ski/snowboard as a sort of dry run before coming back to do the same thing  later in the week  with their youthful charges. (Since I have both a back and a knee injury, I was red-shirted for skiing and assigned to the 'ground team', half of whom would be assigned to the lodge as contact personnel, and the other half who would be escorting non-skiers to a nearby outdoor tourist/cultural venue.)

After an early departure from Seoul and a 90-minute bus ride, we checked into the main lodge at Elysian Gangchon Ski Resort  with the rest of the faculty and parents, where we got details for our various responsibilities and a tour of the building.


Elysian is the closest ski area to Seoul - an easy 90-minute drive the day we went -and seems used to catering for international crowds. Kiosks for lift tickets and lessons were on the main floor, as well as a spacious restaurant overlooking the slopes.  Lockers, equipment and clothing rental areas were located downstairs on the ground floor, where you also exited to the lifts.  The resort and lodge were quite empty when we arrived around 10am Saturday morning(although crowds were heavy by the time we left around 3), and check-in, equipment rental, and lift ticket purchases went quickly and very smoothly.   Reports from my colleagues who skied that day were positive;   the resort was well-equipped, there was extensive English signage, and skiers and snowboarders alike seemed to have had an enjoyable experience. 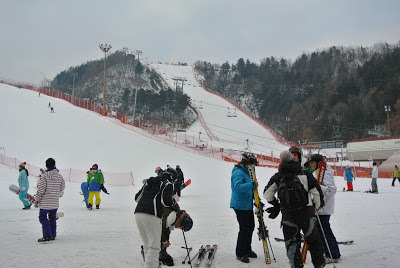 Not having been on skis for more years than I could remember, I spent some time assessing the lifts and the runs with a potential future visit in mind, and decided that I could probably navigate the beginner and intermediate runs comfortably - after a refresher lesson or two.  I was also fascinated to see a conveyor-belt style lift leading to the beginner slopes.  I wasn't even aware that such a thing existed.


Given the fact that the hardest part of learning to ski - for me, at least - was getting on and off the tow bar or the lift without maiming myself, the idea of a slow-moving conveyor that allowed you to just ski right off seemed just short of miraculous.  Another nifty gadget I spied was a number of compressed-air hoses that you could use to spray the ice and snow off your skis or snowboard.  Maybe they're standard equipment at ski resorts now, but - as I mentioned earlier - it had been a while since I'd skied, so they looked pretty high-tech to me: 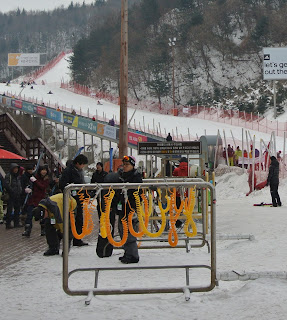 When the rest of the group headed out to the slopes, four of us got on a bus for the next leg of our adventure - a brief 20-minute ride to nearby Nami Island, which - while it is referred to as an 'amusement park' in the translated Korean literature - is not the sort of roller-coaster type of place that most Americans think of when they hear 'amusement park.'  Our goal was to familiarize ourselves with the island and select some age-appropriate activities for our charges - a task which turned out to be pleasantly easy, since Nami Island seems to have been developed with children in mind.

The small island seemed to me to be a cross between a park, a playground, a zoo, and an art gallery. Woodland paths under towering trees, a butterfly garden, an ostrich paddock (yes, really an ostrich paddock,) ponds, and playgrounds dotted the landscape.  Of course, since we were visiting a primarily outdoor venue at the peak of winter, it wasn't quite the verdant green parkland that's usually pictured in the advertisements.  But you should be used to me doing this sort of thing by now.

Circles in the Sand said…
The ski resort looks fantastic! Especially love the conveyor belt... My DS1's class is going on a field trip soon to Ski Dubai (in Mall of the Emirates) as they're learning about weather!
January 20, 2013 at 5:12 PM

Trish said…
What an adventurous couple you are, thank goodness the temperatures have risen a little.
I've never been skiing and the boys, who both have, don't particularly fancy doing it again! Shame, because I rather like the idea of going on that conveyor belt.
January 20, 2013 at 7:16 PM

MsCaroline said…
Circles - I can't tell you how much something like that would have come in handy back when I was learning to ski - my poor dad, it must have been awful riding up on the tow bars with me. I love the idea of teaching weather as part of a ski trip - although I imagine teaching the whole 'indoor snow' thing might muddy the waters just a touch....; )
January 20, 2013 at 8:58 PM

MsCaroline said…
Trish - MrL is always much more adventurous than I am - notice which one of us was hanging off a waterfall from a pair of ice axes (hint: not me.) I agree with you about the conveyor belt, though: I was tempted to hop on even though I wasn't skiing!
January 20, 2013 at 9:00 PM

Michelloui | The American Resident said…
Wow! What a great weekend! One thing that I have found difficult about winters in the UK is that there isn't as much to do outside as in the States (where I lived, anyway). It's too warm to ski, too wet to cycle or walk much. I love that you both go out and do these things together.

BavarianSojourn said…
Mr L's activity looks truly petrifying!! I like the sound of yours better, especially as you didn't have to go near any skis, although the travelator things sound like a much better idea than the usual hideous lifts! I might be tempted I suppose! :D
January 23, 2013 at 2:19 PM

MsCaroline said…
Michelle - oh yes, the term 'gearhead' has been used for many years. All I cant say is that at least he uses it!

Emma - Yes, I am pretty ok with rock climbing, but I worry more about ice - because I'm always afraid it will melt. I am way too out of shape to go along on anything like that these days, though. I loved the conveyor thingy too. I learned to ski in Austria using just tow-bars and it was so traumatic it's really miraculous that I ever skied again, much less enjoyed it. It just figures though that after all the anguish I went through finally learning how to get on and off lifts and t-bars, NOW they come up with a conveyor belt.
January 23, 2013 at 11:13 PM

Trish said…
Have made you an honorary BritMum today by including this post in my monthly travel round-up.

MsCaroline said…
Trish - thank you so much - I'm very pleased, and so will MrL be. If any BritMums are traveling (or should I say 'travelling') to Seoul, they'll know who to contact!
February 4, 2013 at 12:37 PM