On The Bright Side


We're just a week or so into 2013, and MsCaroline is keeping a positive attitude, mostly through escapism reading and trying to stay busy.  It is truly amazing how little subzero temperatures and a blanket of snow bother if you just stay inside and alphabetize the DVD collection.  Once you've finished cross-referencing by date and production company, you'll find that the time simply flies by.*

But all joking aside, as I mentioned in my last post, we here in Korea are experiencing a winter of record-breaking cold, which is - according to the experts - not even halfway over yet.  Knowing that she has weeks (or months) of bone-chilling temperatures ahead of her, MsCaroline is trying to do doing what the experts recommend and focusing on the positive, which she is finding damned hard challenging.

Nonetheless, she finds that she is making progress, and, with any luck, she won't have descended into gibbering idiocy by the time the cherry blossoms appear again.  What does she think about on those days when the bone-chilling cold, the isolation, and the generally challenging nature of winter in Seoul crush her spirit and sap her will to live?

This stuff - some very little, some big: 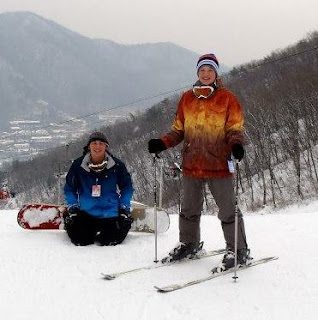 She does not want to discuss how it felt to watch Son#1 go through the security gate at Incheon when he headed back to the US, though.  She is glad there is Skype. 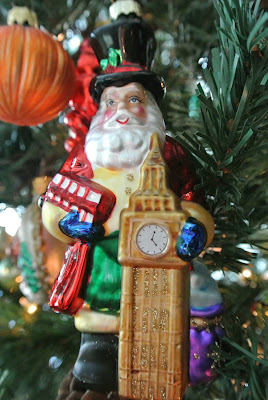 In the same vein, Son#1 - knowing that MrL and MsCaroline are hopeless Game of Thrones fans - got them both GoT-themed coffee mugs.  MsCaroline's is heat-sensitive, which means that, when filled with something hot, it changes from a dark, opaque blue to a white background upon which you can see the phrase, "Winter is coming." MsCaroline knows that it is sad that she is so excited about this, but she doesn't care. 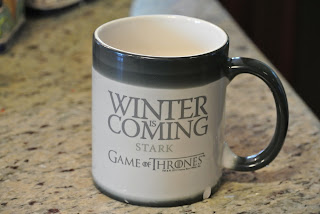 linda@adventuresinexpatland.com said…
Oh MsCaroline, this post made me chuckle so much that I had to put down my koffie for fear of spewing it over the laptop screen (that or choking on it, neither of which is ideal). Came out of the gates strong and maintained a rollicking pace throughout. First post I read today, thank you for starting it off right!
January 10, 2013 at 2:36 PM

MsCaroline said…
Thanks Linda, that's good to hear - I was trying to find that fine balance between whining and humor!
January 10, 2013 at 9:45 PM