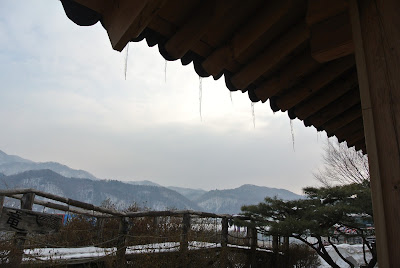 In yesterday's post, I talked about this past Saturday, when MrLogical and I headed out on our separate adventures in the ice and snow.  While MrL was hanging precariously by ropes and hacking his way up a waterfall with deadly-sharp axes, I was:  a) wandering around a ski resort; and:  b) experiencing Nami Island for the first time.  As far as I can tell, Nami is a fairly popular tourist destination with Koreans and foreigners alike.  Its tree-lined pathways, gardens, bridges, and playgrounds make this tiny island a combination of park, playground, and outdoor art gallery.  For this reason, Nami is very popular with visitors in the spring, summer and fall, when the lush plantings and parklike setting can best be enjoyed.

It stands to reason, then, that I would end up visiting in January, when much of it was covered in a layer of snow and ice.

It is, however, a testament to Nami's quirky charm and the creativity of its managers that I thoroughly enjoyed the time I spent there, despite temperatures hovering around freezing.

Nami is about 90 minutes south of Seoul by bus or car, and was only about a 20-minute drive from the Elysian Gangcheon Ski resort where we had spent the morning. Our group of teachers was visiting to get an idea of the various activities offered and to see what (if anything) there might be for kids to do.

We arrived at the ferry parking lot around noon, and it was quite crowded.  As we made our way toward the ticket booths, I noticed this sign, and began panicking because I didn't have my passport with me: 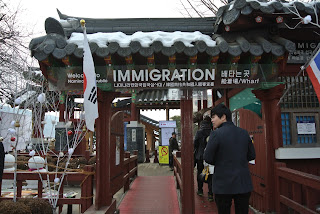 I needn't have worried, though.  Part of Nami's charm is that it pretends to be a bit of a whimsical little imaginary country of its own, called "Naminara Republic."  The gentle facade begins as soon as you arrive at 'Immigration'(ticket booths) and continues while you are on the island.  We paid KRW8,000 each for a ticket that included a round-trip ferry ride to the island and admission to the island.

The ferry dock where we waited was decorated in a whimsical winter theme.  Whimsy is everywhere on Nami, and it starts before you even get on the ferryboat. 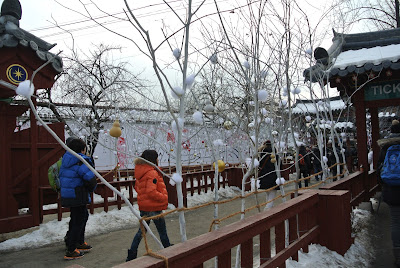 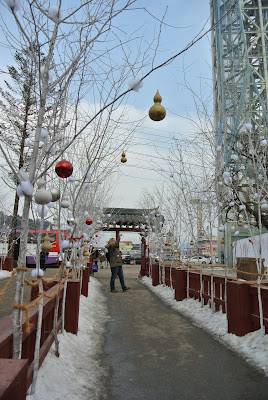 We waited on the ferry dock for a very short time and then trooped onto the ferryboat with the rest of the crowd.  The boat was decorated with colorful flags of the world, and the brief ride was smooth and pleasant, although chilly.  We chose to stay outside on the deck despite the cold:  it was just too pretty, in an arctic sort of way.

We arrived within 5 minutes at the dock, where a departing crowd (and some interesting ice sculptures) were waiting for us: 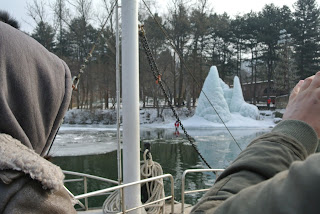 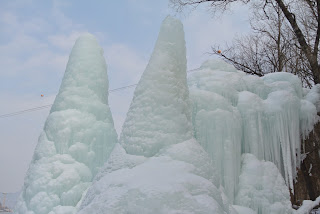 Not really sure what to expect, we walked onto the island and found ourselves in an open area that featured several low buildings - information booth, shops, kiosks, toilets - lots of trees, and paths flanked by towering trees leading off in several different directions.  No cars, no billboards, no telephone poles. 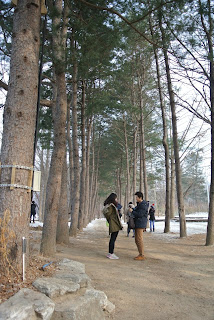 Everything was marked well in English, and we immediately noticed a theme that would continue throughout Nami:  art and sculpture everywhere, much of it made out of repurposed and recycled items.  First up was this Christmas tree made out of empty soju* bottles: 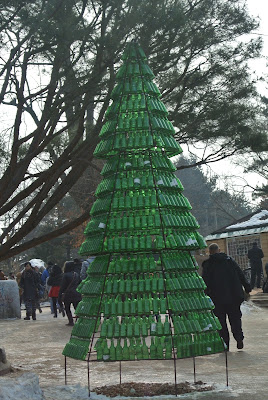 Another nice touch was the firepits that we found strategically located throughout the island where chilly tourists could huddle and warm themselves up before doing a little more sightseeing: 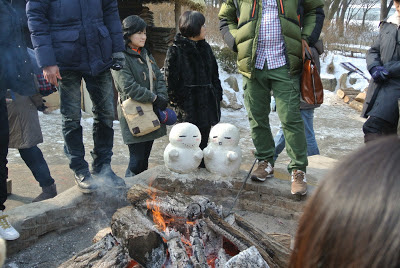 If you're wondering - like I was - why the little snowmen aren't melting, it's because they aren't snowmen.  They're little Nami Island people (sort of like mascots of the island, I guess) and we would see them perched in various locations - in varying sizes - as we walked around the island.

Keeping in mind that we'd come here to scout out things for kids to do, we realized pretty quickly that you could probably spend all day on Nami with a group of kids without hearing those dreadful words:  "I'm bored."  In addition to supporting the arts, and environmental efforts, Nami is also involved with international nonprofit organizations such as YWCA/YMCA, UNICEF, and UNESCO: 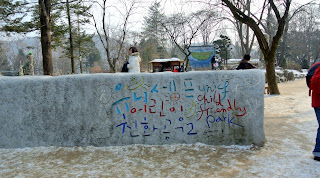 Everywhere we walked, we found broad, tree-lined paths, quirky art and sculptures, and interesting things to do for young and old alike. 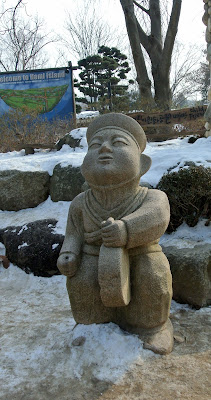 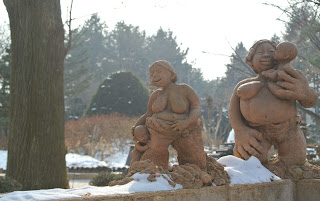 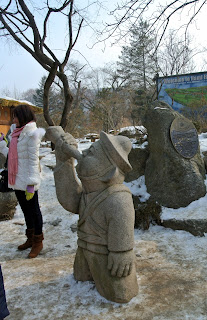 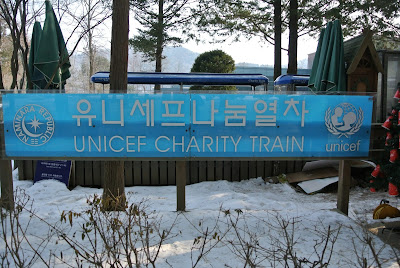 Ostrich-viewing (yes, ostriches.  No, I do not know why.)  I was initially concerned about the ostriches, who I had always thought of as desert dwellers, but they seemed to be perfectly happy in their snowy paddock. 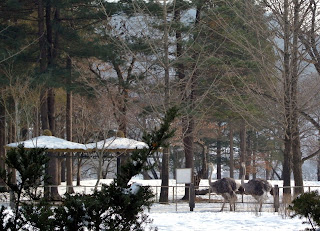 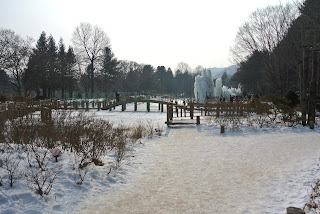 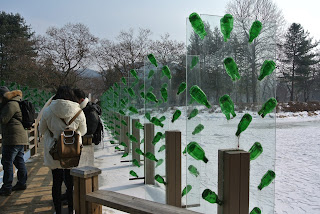 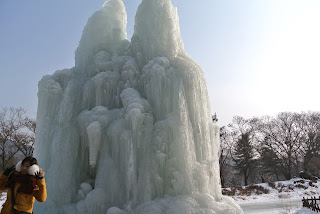 Along the way, we ran across what looked like a series of small thatched huts on stilts, flanked by benches.  Turned out the huts (complete with plastic curtains to protect against the weather) held dozens of children's books (many in English) as part of an educational initiative.  Kids could seek out a book that interested them, in sit themselves right down to read.  You can imagine how excited a group of teachers got about this particular feature: 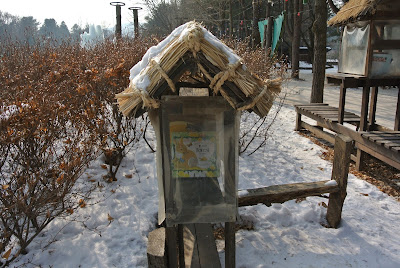 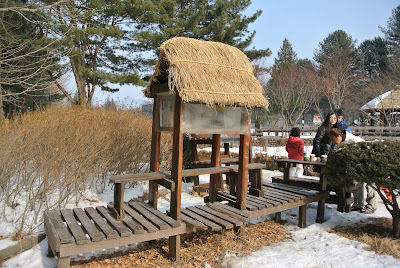 We finally came across the Holy Grail for parents (or teachers):  a big playground, complete with magical castle.  My photo doesn't show much detail, but the looming hulk behind the slide is a large building that looks just like a castle.  Wish I'd had enough time to go explore it. 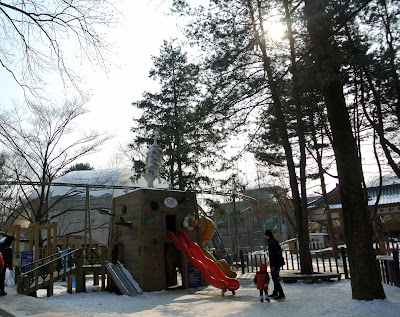 Since we had to be back on the bus to Seoul soon, we had to cut our visit short, but we all agreed that the kids would absolutely love it.  We also agreed that, despite the ice, the snow, and the cold, it had been an enjoyable outing to a magical, whimsical 'world,' and that we'd all love to see it again in the spring.

Karen said…
Love, love, love Nami Island. I want to go so badly! In the snow, especially. I also enjoyed your ski blog, especially the new technology, since it has been many years since I have gone skiing. I gave it up as too expensive and too long waiting in line for lifts. And too out of shape for occasional skiing. It is snowing here and we are looking at a frigid week ahead. A short one, though, since it is MLK weekend here. The long weekend was fabulous, especially since little planned outside of ordinary get caught up around the house. Back to work tomorrow...not one but 2 IEP meetings. Last week was mostly devoted to writing IEP's! Have a good week ahead!
Karen
January 22, 2013 at 12:14 AM

Trish said…
Nami Island looks charming in the snow but I bet it's wonderful in the Spring or Summer. Just my kind of place for mooching with its quirky sculptures.
January 23, 2013 at 12:05 PM

MsCaroline said…
Karen - glad you enjoyed the long weekend - no MLK observance here, but a 5-day weekend for Chinese/KOrean/Vietnamese/Lunar new year coming up in a couple weeks! Can't say I miss those IEPs - definitely an advantage of the part-time thing! I am still debating about trying a ski day sometime when I'm not with a crowd of kiddos and can leave if it turns out to be a bad idea...; )

MsCaroline said…
Trish - yes, I kept thinking the same thing. I was glad to at least have an idea of what it was about though - more motivation to come back when it's warmer!
January 23, 2013 at 11:07 PM

MsCaroline said…
Emma - yes, it was charming. Kept thinking it would seem like a wonderland for kiddos! The Nami people were everywhere although a lot of visitors had made little snowmen here and there (it's that kind of place) so I kept getting them mixed up. Looking forward to returning in the spring!
January 23, 2013 at 11:08 PM