From the Land of the Morning Calm: Goin' Shoppin'! 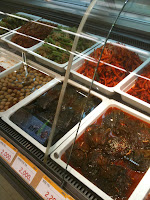 I signed up for the hotel shuttle ride over to E-Mart and Costco. I tagged along with Alan and Betsy (another couple who are in the process of moving over here with my company), since they have been here a while and seem to have some of the tricks down... 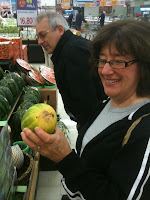 We opted to go just to E-Mart today, since we are just in temporary housing at the moment, and don't have a lot of need to buy in the typical Costco-size quantities.

E-Mart is pretty similar to Walmart or Target back in the US. Everything from appliances and electronics to clothes and housewares to food and beverages, all under one roof. In this case, it is in the basement of a large high-rise.

The shopping carts require you to deposit a 100 won coin (about a dime in US) to unlock it. The first thing that you notice is that all 4 wheels are free to pivot, not just the front two, like on US carts. This makes it very easy to navigate through the crowds and aisles. One has to wonder why that hasn't taken off in the US, since it makes a lot more sense.

Shopping was pretty amusing, since you don't really know what you are buying half the time. You can kind of guess at what things are based on other things in the same area, but sometimes you just have to guess by the pictures or surrounding items.

I picked up some basic staples.. laundry detergent, beer, fruit, beer, chips, spaghetti, beer, ramen, eggs, soju, bread, coffee, juice, burgers, wine, and beer. As the cart loaded up and got heavier, I realized that I had to pack all this stuff back to the shuttle, so I put back one of the 6-packs of beer.

1. Packaging: Does it seem odd to package Soju (Korean liquor) in a "juice box" type container? "Little Johnny always seems to have problems focusing on his schoolwork after lunch...." 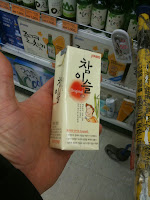 2. Two-fers: Buy a 6-pack of Hite beer, get 2 cans of tuna included in the box. Buy a 4-pack of Singha beer, get a free coffee cup. I can't say that I understand the connections of these products and why they are "bundled" together. This must be appealing to the universal marketing truth that everybody loves a bargain, regardless of whether the items share a common theme or not.. 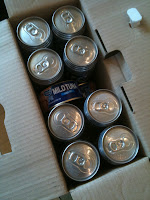 3. Seafood: Lots of great seafood, from the fresh sushi to the live stone crabs to the pickled seafood kimchee. I'm not quite sure what to do with the dried fish tied together.. Maybe these are the Korean equivalent of the dried chili pepper ropes that we have in the southwest, and they can be used for an attractive wall hanging... 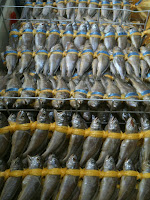 With some help from Alan and Betsy, I schlepped the shopping bags back to the shuttle and up to my room. I should be good for a while.. 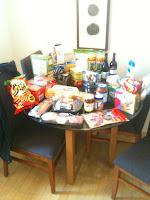 Travel With Lulu said…
There are a few stores in the UK that require coins for a cart. This makes no sense to me - don't they want us to have a cart to fill up? I think grocery shopping in foreign countries is always fascinating :) XOL
April 25, 2011 at 7:08 AM