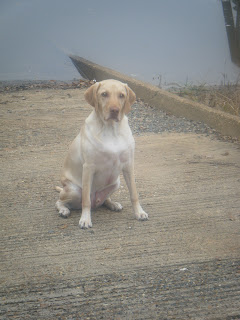 We're still 2 months away from the move, and already, the good-byes are starting to wear on me.  (The menfolk seem to be taking it all in stride, which I find highly unfair.)  One of the hardest farewells will come early; this one, to our yellow Labrador retriever, Shiner, who is leaving us to go live in Alberta, Canada, with my gracious dog-whisperer Cousin S., and her husband, G.


When we began making our initial plans for the move to Seoul, we'd simply planned to take the dog with us.   But after some research, we realized that  taking him with us wouldn't be the best choice, given the rental, recreational, and other facilities available (or not) for an 88-lb canine.    And so, the decision was made to leave him with Cousin S.  Not an easy decision.  However, I hadn't anticipated him going so soon;  in order for him to avoid a long and possibly very uncomfortable ride in the cargo hold of an airplane, he will be going next weekend,  2 months before our departure date and the same day that Mr. Logical leaves for Seoul. (No, no, I'm not putting saying goodbye to the dog in the same category with Mr. Logical.  I would never do that.  Never.  Really..)


However, I promised myself - even though this parting was perfect fodder for a highly emotional blog post that appeals to what my mother refers to as my 'Irish melancholy' - that I would not write anything too sentimental about his coming departure.   If you have ever loved a pet, you will understand without me telling you, and if you have not, nothing I can say will be sufficient.   So, I give you:  Shiner, the yellow dog. 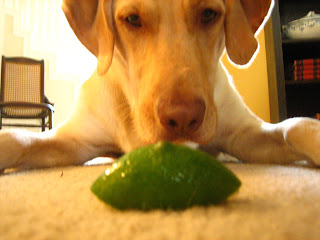 This dog has been one in a series of our preferred breed, the Labrador Retriever (specifically, the yellow kind,) usually on the large side.  The Labrador Retriever is one of the most popular breeds in America, right up there with his hairier relative, the Golden Retriever, and there's a reason for that.  This dog  -probably because they are bred to work closely with people -  loves every human being with boundless enthusiasm, is always happy to do whatever you suggest, is great with kids, and wants to be with you no matter what you're doing. It is for these reasons that we have, in the last 19 years, owned 3 labs, acquiring the first two well before Son #1 arrived on the scene.   In fact, when we realized we were going to have Son #1, we worried inordinately about how the dogs would 'take it.'  As it turned out, we needn't have.  Dogs and boy (and later, boys) shook down together just fine. 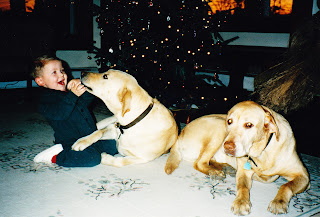 Our relationship with this particular dog began almost 6 years ago.  Our two previous yellow labs, having survived to the venerable ages of 13 and 14, had died not long before we moved to Texas, and we had been dog-less for almost 4 months before we found an acceptable breeder with yellow puppies.  As many of you know, having a new puppy is very similar to having a human baby, except they arrive at the toddler stage, so you don't get that honeymoon period where they look adorable but aren't yet mobile.  Although we had raised two previous lab puppies, let's just say that it had been a few years.  It took us a bit to get over the initial shock of realizing that raising a puppy in your 40s is completely differerent from raising a puppy in your 20s..  For one thing, we had no children back then.  All we had  then was time and energy, two commodities in short order in our household some 14  years later.  However, the children were thrilled, and the puppy was adorable, so we soldiered bravely on and hoped for the best.

Inevitably, the excitement of The New Puppy wore off.   The children returned to school, Mr. Logical returned to work, and it was just The Dog and I.   In those years when I was staying home with the boys, he was my constant companion.  The puppy years were not easy, and I spent most of them trying to civilize him. We took endless miles-long walks (often twice daily) to try and use up some of the 'young dog' energy; I struggled to get him to 'heel' and 'sit' and  'lie down;' and I worked desperately on the 'stay' command, trying to counteract some of the irrepressible labrador enthusiasm that caused him to charge at full speed toward every person or dog he met.  It was also during that time that I learned that this dog would eat anything.  ANYTHING.  He ate the corners off the baseboards.  He ate doorstops off the wall.  He chewed shoes, socks, hats, books, and television remotes. Combine this tendency with two pre-teen boys who left in their wakes trails of Lego, Spiderman, GameBoy cartridges, and Silly Putty, and you have a recipe for disaster.   At around 13 months, he gorged himself on some household detritus and ended up a very sick dog indeed.   While some people might have seen this as a just and fair Judgement of the Almighty and had  him "put down", we went ahead and had the items (a sock and a ski glove, if you must know) surgically removed at breathtaking cost.  Because, a year into the whole thing, he had somehow -despite all his bad habits - become Our Dog, and we couldn't bear to lose him.  He had woven himself into the fabric of our family's life.  He was part and parcel of us, a third child, a playmate for the boys, and my faithful shadow as I went about my day. 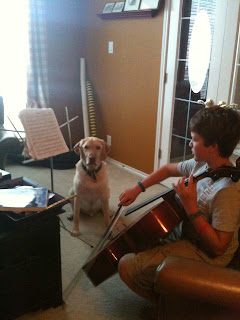 Looking at it logically, it certainly seems that his negatives outweigh his positives.   In fact, he is something of a byword among our friends and family, due to his proclivity for eating non-food items which either reappear in  dramatic fashion or else require surgical removal. (After his first surgery, our vet made a point of telling us, "You realize, he will not learn from this."  And he didn't.)   He has skin allergies, is astonishingly flatulent, and will eat virtually anything that is not nailed down. He can stealthily remove an entire steak off the edge of a kitchen counter, is startled by everything, including his own reflection, and  is cowardly to the extreme (he has been known to bark hysterically at a beetle, all the while maintaining a safe distance.)  He is also clumsy (he has fallen down the stairs on more than one occasion), and can clear a coffee table with his tail.   I should also mention that he has an inexplicable obsession with ice cubes. 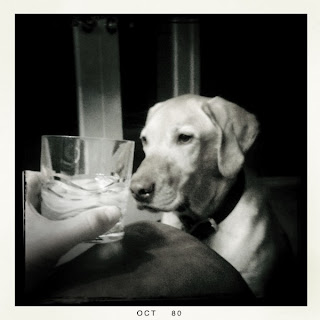 In short, he is probably the farthest thing from the Perfect Dog one could ever imagine, and that is precisely the reason we love him so. 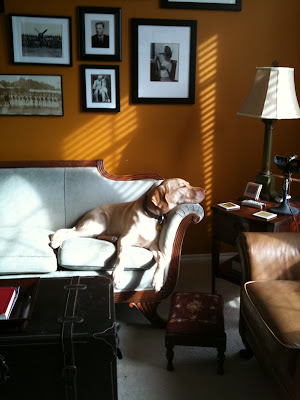 Unknown said…
That's a lovely tribute to Shiner, Carolyne. I trust that your cousins have been made aware of his penchant for sock-eating prior to this? :)
April 10, 2011 at 8:23 AM

MsCaroline said…
Aw, thanks, Wilma...had to make it lighthearted or I would have sobbed all the way through writing it...and yes, we have made a full disclosure to Cousin S. Miraculously, she's still willing to take him...
April 10, 2011 at 1:51 PM

Marion said…
I love this last picture (all of them actually). This last one and the one where he is looking at whatever that green thing is look like book jacket photos! Write more soon!
April 11, 2011 at 2:22 AM

MsCaroline said…
Marion, the green thing was actually a lime. We gave it to him just to see what he would do with it..answer: he stared at it in perplexity. I know you recognize the other one...you've sat there many times! I'll be posting more assuming I survive this week and shipping off both dog and husband without a nervous breakdown..; (
April 11, 2011 at 2:31 AM

Unknown said…
OK, this makes my heart sink. I, too, am sad. I feel ownership of the Shweine, having helped extract many an object from the working end of him during the 2-a-day walks. Many fond memories watching him bark at, chase then eat beetles and flying bugs, stand as our sentry at the ante-chamber window, protecting us while we were blithley unaware of the many predators in the sac, being on the receiving end of the vent, haivng an 88-pound lap dog cozy up on the couch with me causing a small hernia... We who love Shiner expect Cousin S. to keep us posted on her Schwein Chronicles until he returns to his post as The Family Gatekeeper.
April 11, 2011 at 6:53 PM

MsCaroline said…
@PM: I'm glad some of his good qualities shone through at least a little. I think having a dog is like having children: you overlook all of the nightmarish events because you can't imagine doing otherwise. Most of them are far less trouble than our, though. Should you ever decide to take the plunge, I doubt you'd experience anything so dramatic..... But you might want to wait until the Boys have outgrown Lego. Just saying.
April 12, 2011 at 2:24 AM

MsCaroline said…
@Kelly: The dog is absolute fodder for anecdotes. I could have written any number of posts about him: The Incident With The Underwear, the Ass-Carones(btw, shall I send you some, or do they have 'em in Florida, too?The girls could have so much fun with 'em!),The Time He Pulled Me Off My Feet...the list goes on... You should really be writing a guest post about the Schwein; God only knows you spent almost as much of his puppyhood with him as I did! Miss you...
April 12, 2011 at 3:28 AM

Joshua Austin, DDS said…
Amazing piece, Carolyn. You are an amazing writer! I feel your puppy pain and can't imagine having to make such a difficult choice. I fear I would be the type to make my dogs suffer in a less than hospitable place so that I wouldn't have to make such a decision.