Moving Chronicles: Holding Down The Fort 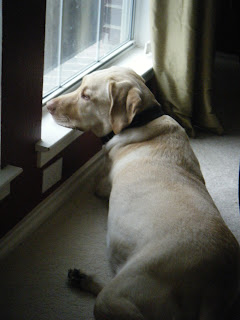 Mr. Logical's been in Seoul for almost a week now;  he's mastered the use of the light switches, gotten 'integrated' at his office, eaten out a lot, and memorized the bus route to and from work (an accomplishment, since he can't read Korean yet and must navigate via landmarks.  According to him, you know it's time to get off when you pass the building that looks like a Transformer. No comment on which Transformer, but I like to imagine it's Optimus Prime.)

While my role is admittedly less glamorous, I think we can all agree that it's equally important, and for this reason, my post today is all about Holding Down the Fort.  In our 19 years of marriage, I have done this on more than one occasion, due either to Mr. Logical's business traveling or else an interstate move.  When the boys were smaller, this was a fairly daunting task, but it's somewhat easier now that they're both teenagers.

Lest I be accused of Whining about our international separation, let me state up front:  I am not whining.  In fact, compared to some of our previous moving arrangements, this situation is really hardly worth mentioning. If we're going to talk about being entitled to whine, I could talk all day about our last move.  In the last move, Mr. Logical was required to be on-site at  a project in a place we'll  call 'State #2', flying back every couple of weeks to spend a few days with us back in State #1.  In the meantime, I was overseeing the showing and selling of our house, 2 elementary-school children, packing up, moving, and finding a new house in State #3, where Mr. Logical's actual office would eventually be.

Mr. Logical  took enough time off to accompany us on the move to State #3, where we he put together the bed frames, hooked up the cable and internet, and then jetted off back to State #2, confident that I had matters well in hand.  (and I did, too, except for the power outage and the squirrel infestation, but really, it all turned out just fine.)  We kept this arrangement up for about 6 months, until the project was finished and Mr. Logical could join  us in State #3.  So if you want to talk about whining, there's a topic for you.

This time, things are a little more orderly.  The children are older and relatively self-sufficient, and  Son #1 can drive, which is a huge help in getting Son #2 to all his before- and after-school activities.  Of course, I'm  back at work these days, which just adds to the generally  zany atmosphere.  But overall (sorry, Mr. Logical) we are managing just fine.  Now, naturally, there have been a few bumps along the way in the first week, but I am nothing if not resourceful, and I like to think that, if I can handle this week, I can probably make it through the next six.  I give you just a few highlights:

Going to 'An Evening With Strings' to watch Son #2 and his middle-school orchestra (along with 4 other middle schools, 3 high schools, and 8 elementary schools) perform a concert.  As with all things in Texas, this gathering was enormous, crowded, and took place in a sporting venue, since that was the only place big enough to contain everyone.    However, with just over a thousand musicians (and, by default, their thousands of parents, relatives, and friends) the traffic to and from is a nightmare, parking is madness, and the bleachers (where we all sit to watch the musicians) are uncomfortable and hard.  Of course, we're extremely proud of Son #2 and his prowess on the cello, and love to hear him play.  But I have to admit that we have dreaded this particular performance each year since he started playing.  Let me hasten to say that I am not at all suggesting that Mr. Logical timed his move to Seoul just to get out of going to this performance.  But you have to admit it is suspicious.

Discovering two days after Mr. Logical leaves, that the brakes in my car are making a noise like a dying walrus.  I will leave to your imagination my attempts to describe this noise via Skype and Mr. Logical's attempts to diagnose the problem long-distance.  Suffice it to say I'll be taking it to the shop next week.

Of course, this means I've been driving Mr. Logical's car, which is, admittedly, cooler than mine, but since it's a standard and I have been driving an automatic for a number of years,there's been a certain amount of  what I'll call, "reacclimatization."  I'm pleased to report that, after 3 days, I now remember to put it in gear when I park it, so it doesn't roll away.

Not being very helpful at all with Son #2's required demonstration of  'The Respiratory System' for his science class.  Fortunately, Mr. Logical had helped him put together a very nice pair of lungs comprised of two Ziplocs and some rubber tubing before he left, and these, installed beneath an excellent drawing on a plain white t-shirt, achieved the desired affect.  I was not very helpful because I can't draw and and am really better at book reports.  I did, however, provide the t-shirt and a Sharpie for drawing the lungs, which - I feel - are really extremely well done, even if the trachea is slightly enlarged. 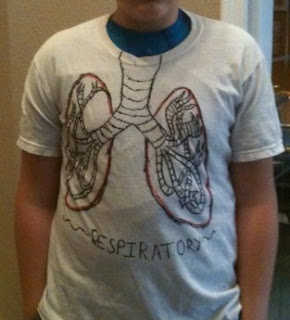 Having gum graft surgery yesterday with my 17-year-old son attending me as the 'responsible adult'.   This situation lends itself to so much amusing commentary I really need to save it for a post of its own.  However, the upshot is that I have been putting off this surgery for 6 years, and only the fear of possibly having to get it done while in Korea was enough to galvanize me into action and take the plunge.   For those of you contemplating a similar surgery, let me say that the pain is really minimal, but the swelling around my top lip and nose has made me look very much like one of Dr. Seuss' Whos.  I've been told I may also experience some bruising, and there is already the beginning of a 'bruise mustache' on my top lip.  All in all, an excellent time for Mr. Logical to be overseas.

Content in a Cottage said…
You should call those guys on NPR that are on "Car Talk' every Saturday morning. They would have great fun diagnosing a car making a noise like a dying walrus. Wishing you a speedy recovery.
April 23, 2011 at 8:11 PM

MsCaroline said…
You're right! They have far more experience in diagnosing cars by sound than my husband does, anyway...and I have always wanted an excuse to call them. Wish I'd thought of it myself...
April 23, 2011 at 9:25 PM

Wilma said…
Darn!! I'll have to pass that information on to Sean. He was hoping for Optimus also. :(

Karen said…
Read this with great amusement on our last day of our California trip. The zoo in San Diego today, topped off with our most expensive dinner at the Hard Rock Cafe. I thoroughly enjoyed my pasta with artichoke hearts, mushrooms, olives, roasted red peppers and a lemon caper sauce. All my favorite things!! I'm glad you are managing, right down to the gum surgery. Hope the dying walrus isn't too bad...sounds like brake pads to me, but what do I know!! Hang in there!!
April 24, 2011 at 4:17 AM

MsCaroline said…
Karen, sounds like you have had a perfect vacation in Cali! The pasta sounds wonderful (to be honest, any food that is not applesauce and mashed potatoes sounds pretty wonderful)As far as the car goes...yep, it's something with the brakes, but not the normal 'break wear' indicator sound. More of a dying groan when you put the brakes on. Most likely something is bent or there is a stone or something in there...the noise is really more of a groan than anything...thanks for the good wishes and safe travel back to New England!
April 24, 2011 at 2:04 PM