(With apologies to Jane Austen):  It is a truth universally acknowledged, that a suburbanite who is moving must be in want of a garage sale. 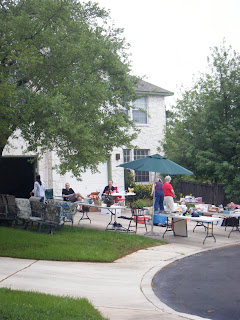 There’s nothing quite as quintessentially American as a garage sale.  It’s got all the right elements: Independence, Capitalism, a Pioneering Spirit, and a certain amount of Manifest Destiny.  You’re selling your own stuff from your own garage at your own prices.  There’s a subtle flip of the finger to the tax middleman, a zesty sense of entrepreneurship, and the thrill of getting a really good bargain as you unblinkingly negotiate a smokin’ deal for that pile of old VHS videos with the steely-eyed determination of Donald Trump. There's a bit of a festival atmosphere in the air as groups of people stroll from house to house, cars come and go, and enterprising kids take the opportunity of a captive audience to peddle their wares.

Above all, there’s the hearty sense of community connection you feel as your neighbors stop by to cast an eye over your stuff and – if you’re lucky – bear it away to their own homes, where it will someday become fodder for their own garage sales.

Actually, I hate garage sales.  They remind me a bit of going clubbing in your 20s.  You spend an inordinate amount of time trying to package your goods attractively, and then you wait, hoping someone will come along and be interested.

All that to say:  we had a garage sale this morning to clear out a bit before our move to Korea.  It was modestly successful, as these things go.  We have less stuff and more money, although there’s a part of your mind that’s always wondering if you really should have stuck to your guns on the price for Grandma’s relish tray.

We sat in our neighbors’ driveway, since we’d forgotten to apply for a permit of our own (so much for that ‘zesty independence’ or whatever I called it), drank coffee, and people-watched (I wish I'd had the presence of mind to get a photo of the elderly man in the 'I'm with the band" t-shirt.)  I let Mr. Logical deal with all of the negotiating, since I'm hopeless at it (I have been known to negotiate my own price down for the customer, so it's better if I just sit and drink coffee) and chatted with our good friends and neighbors, M & M.


I had a few wistful moments of thinking that this would be our last Spring in Texas (at least for a while), not to mention the last year that #1 son (who graduates in June) would still be in the nest, but I managed to pull myself together before I got out of control and instead marveled at the extraordinary fashion sense of the typical garage sale shopper we were attracting.  (Why not the fuchsia Spandex jumpsuit with the Skechers shape-ups? Well, why not?)


We sat out there for 3 hours or so, enjoying the misty Spring morning, the cool temperatures, and the company of our friends and neighbors. Mr. Logical leaves for Seoul in just two weeks, so on some level, this garage sale was another one of the many 'last times' we have ahead of us. We've done it before, but it doesn't ever get any easier; saying goodbye to our friends is always the hardest part of the move. 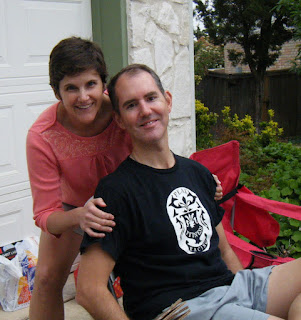 Potty Mummy said…
Have been looking for other posts and can't find any so; is this your first post on this blog? If yes, it's a great one. Good luck with your move!
April 4, 2011 at 6:06 PM

MsCaroline said…
Thanks, PM: Yes, it's the first one. I've been an avid blog reader (you'll recognize more than one familiar name on my blogroll) for a few years and have always wanted to start blogging myself, so it seemed like it was a good time to take the plunge...
April 4, 2011 at 11:46 PM

Wilma said…
Sounds like you had a great time. You have to get permits for garage sales? That's a new one on me. LOL Looks like your blog is off to a good start. I'll be following it.
April 6, 2011 at 12:57 AM

MsCaroline said…
It was news to us, too, Wilma. Notice that I did not get one! That's why we had to drag our stuff over to the neighbors' driveway - we didn't have a permit of our own. Keep in mind that the state of TX has no state income tax. As far as we can tell, they make up for this with a combination of astronomical property taxes and exorbitant garage sale permit fees....
April 6, 2011 at 4:44 AM

MsCaroline said…
Marion - I'm glad you found it, too, since you know all the actors! We will probably post links on FaceBook when we post something new, but I just added a 'follow by email' thing to the blog, so if you put your email address in there, you should be notified by email whenever I post something new...at least I think that's how it works...
April 7, 2011 at 2:56 AM