Mr. Logical is leaving for Seoul in just under 2 weeks, and the farewell festivities are ramping up.

Yesterday he said goodbye to a group of friends who have been a highlight of our lives in Texas:  his cycling team. Yes, cycling like Lance Armstrong (well, not exactly like Lance, but you get the idea.).  Long distance, grueling, fast-paced cycling in a peloton (that's 'group of bike riders' to you and me). Cycling complete with detailed training regimens and statistical gadgets that measure every possible aspect of the ride:  elevation (Texas Hill Country, y'all), speed, heart rate, cadence, power, and probably our bank balance, too. (Logical Husband loves nothing more than a good piece of technical gear, but that's a post for another time..)  Lest you doubt  the truth of my words, feel free to observe and analyze the data from yesterday's ride: 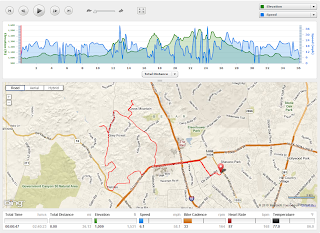 Actually, the team is not exclusively for cyclists.  It's a local team for amateur competitive athletes (who also have those pesky day jobs).  His team includes not only road cyclists, but also runners, swimmers, mountain bikers, and triathletes, all of whom train and compete for the joy of it in their spare time (I know, I don't get it either.) Joining the team basically involves agreeing to race at least 5 times in a calendar year, which is nothing at all for this highly competitive, ultra-motivated group. Up until now, as far as I could see, the selling point for his joining the team was the high-end cycling kits (apparently, the pricier they are, the comfier they are...or so I've been told), discounted whey protein and electrolyte replacement powder, and a handy excuse to feed his gear addiction ("But honey, the carbon version would be much lighter...").  That, and the after-race beer.  So, for the most part, I viewed this team as a bunch of nice people that he rode with, and didn't give it too much thought except that I was glad he had a pastime he enjoyed and it wasn't a motorcycle or a hang glider.

But now the end is near, and I'm realizing that this team has been more than just some people for him to ride with.  Yes, they've trained together, sweat together, egged each other on, talked trash with each other (the races up the last hill into the neighborhood are always all-out cutthroat attempts at the title of  "King of the Cul-deSac",) and socialized over a beer when it was all over.  But they've also done much more:  stood out in chilly rain to cheer on racing teammates at an ungodly hour on a Sunday morning; encouraged each other when the going got tough; rejoiced with each other in triumph, commiserated in defeat, sympathized over injuries (there have been more than a few);  kept each other accountable with just the right mixture of encouragement and tough love; groaned over wipe-outs (and the resulting bike repair bills); and yes, grieved with each other over losses that had nothing at all to do with cycling.

Yesterday Mr.  Logical took what would probably be his last big group ride before leaving; when he got home, he was a bit subdued.   I know (even though men don't often say these things) that saying goodbye hadn't been easy for him.  That he was already aching to have to be leaving such a meaningful part of his life here.  That the friendships he'd made on this team would always be important to him.  But, as I said, men don't often say these things, so  he simply told me he'd had a great time and that, yes, he would miss them.

And I know he will. 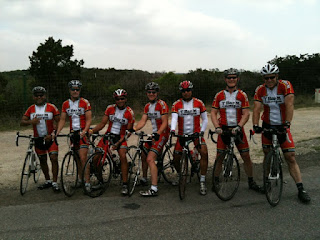 Wilma said…
Wow! That's some crazy sort of print-out from the bike ride. Insight into the inner-workings of an engineer's mind, right? LOL I bet he'll find another biking group in Korea too.
April 6, 2011 at 1:00 AM

Karen said…
I'll be following, Carolyne. Are you sure you are not coming to Boston first? I know you will have a great adventure, and don't worry about Sutton...he will never forget this experience, but often the first year of college is very forgettable. Goodbyes are tough...you don't have to say goodbye to those of us on Fans, we will all be there, just like before!
April 7, 2011 at 2:14 AM

MsCaroline said…
Karen, I would love to come to Boston, but I don't think I'll have time before we leave, but so wish I could...check my FB, you'll see photos of my Aunt and Uncle (they are retired and live in Maine) visiting my cousin in Falmouth (MA) and getting fitted for new hearing aids at her store...would so love to see them both before I go... I knew I should have tracked you down when we were in Providence for that family reunion! Definitely happy that some things will not change at all, KF being one of them!
April 7, 2011 at 3:04 AM