From the Land of the Morning Calm: Walkabout 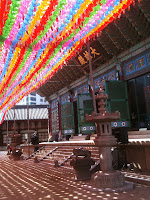 Had my first good day wandering around Insadong (the area where my "serviced apartment" is located). I went out in the morning to try and learn my way around. It is amazing how much there is to see just wandering around. Insadong is on the northeast side of the heart of downtown, near a number of historic landmarks ("Master Min Yeong-Hwan's suicide committed site") and notable buildings (Jongno Tower, aka the Transformer building, aka Megatron). 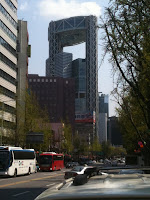 The crowd was pretty light in the morning, but lots of good people watching. I walked around the block, and snapped a few pictures. I stopped in a small cafe and had a coffee and a bagel. I'm going to have to get used to the fact that they don't have a lot of coffee "fixin's" like I'm accustomed to.. No half-n-half, no nutrasweet.. Seems like they have brown sugar and sweet syrup as the typically available coffee supplements. Another anomaly seems to be that they don't usually give you a napkin with your meal. There is usually a small container with some very small, thin napkins (about 4"x4") available, but they almost seem like an afterthought.

After grabbing a bite to eat, I stopped by a bakery to grab a desert to bring to the Italian Pot Luck dinner that our HR guy is hosting at our "serviced apartment" building. I ended up buying a pound-cake, since there was nothing obviously Italian. I think it'll do... After swinging back by the apartment to drop off the cake, I headed back out to get some walking exercise.

When I went back out, things had definitely picked up a bit. Lots of people were out, with groups of Chinese and Japanese tourists, street vendors, and people out enjoying the weather.

Saw a street vendor drawing a crowd by making these origami grasshoppers out of palm fronds while everybody watched. 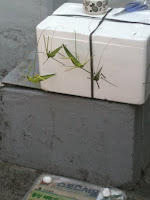 It's pretty amusing to see the various not-so-accurately translated signs and slogans on the stores and advertisements. I'm sure we'll be freqenting this place once MsCarolyne gets here.. 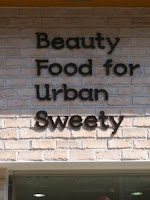 And of course, one has to wonder if the Koreans really think Westerners have big heads... 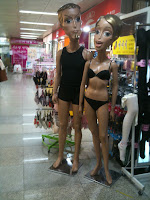 There is a large building constructed over the road that runs along the east border of Insadong that is full of musical instrument stores. It is pretty amazing, with hundreds of small shops and stalls, selling all kinds of instruments and musical equipment. The "Hello Kitty" Ukelele was pretty amusing.. 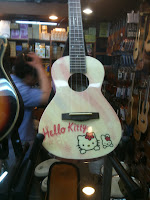 At the end of the walk, I at least felt like I have a little better handle on navigating this part of town.
Email Post

Unknown said…
Mac would be stylin' with that Hello Kitty guitar.....